TPC Sawgrass’ Stadium course has been the home of the Players Championship Tournament every year since 1982. The course is a Pete Dye design and was built in 1979. It has probably the most famous hole in golf, the 17th hole with its island green . . . I’ll talk more about that later.

Apparently a theme for this trip was new clubhouses. There was a new clubhouse at the Ocean Course on Kiawah Island as well as TPC Sawgrass. It was, in my opinion, typical of what you would expect from a resort course clubhouse.

We had a tee time of 1:03. At this time of year we were really going to be pushing daylight and I hoped that we would at least get to the 17th hole before it was too dark. Rounds at these resort courses tend to run long sometimes hitting 5 hours or more. Unfortunately we were delayed 20 minutes and our caddies estimated that we’d run out of daylight on the 15th tee.

We were just a 2 ball today each with our own caddy so the starter paired us up with a couple of guys who shared a double bag caddy. That made for 7 of us in the group which always makes it fun. The more the merrier!

Everyone has seen the course on TV, so I didnt take a whole lot of photos. Overall the course was in great condition. It kind of reminded me of Harbour Town with a fair bit of water, long bunkers and lots of wooden bulkheads. Below is the view of #10 as you come over the walkway to start the back 9.

Our caddies here were 10 times better than the ones we’d had at Kiawah’s Ocean Course the day before. The Ocean Course caddies we had were little more than pack mules and these guys were a lot more like full service tour caddies. My caddy Mark was great and not only gave me great yardages, putt reads and shot selection advice he was a great cheerleader and confidence builder. Still didn’t help me putt worth a darn though.

Speaking of putting, the greens here have the same SubAir System that is used at Augusta National, so they are like rock. It was really hard to get shots to hold the green if you were hitting out of rough and they were plenty quick on the putts.

Below is a photo that is a indicative of the overall look and feel of The Stadium Course . . . sand and water.

So as we head into the home stretch we’re racing the sunset. We teed off on #15 which is where the caddies thought we’d run out of daylight with plenty of light left. We managed to make it through #16 and get on the tee box of 17 with just enough light left to hit our tee shots.

Below is a photo of the 17th from the TPC website. Theres no sense in recreating the wheel when we are talking about one of the most photographed greens in the world, so I didnt even break my camera out. The photo is taken from behind the green. We teed off from the ledge just in front of the tent on the right side of the photo. 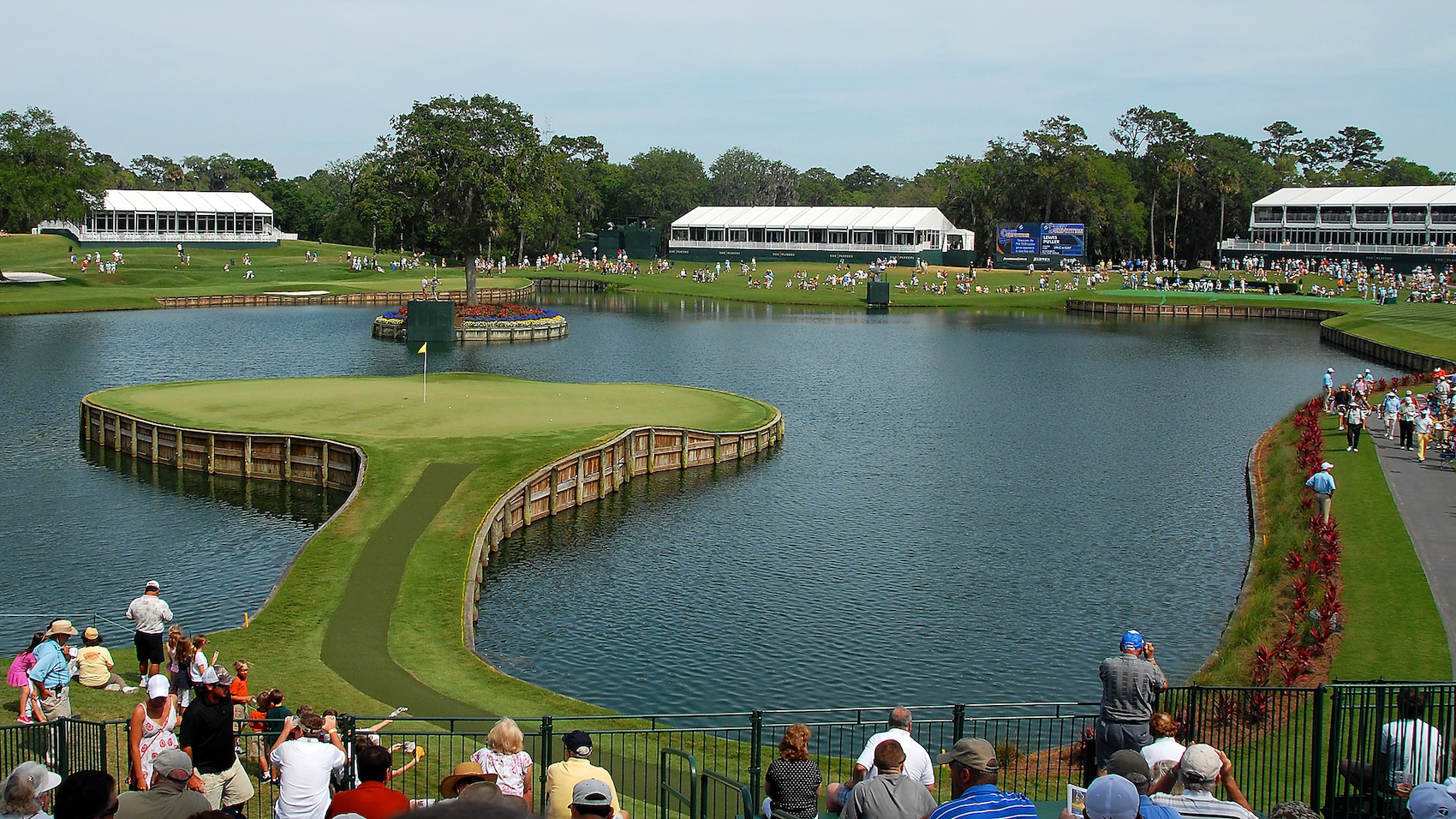 We went back to the tee box where the pros hit from and let it rip. It was just dark enough that you couldn’t see the ball once it took flight. You had to listen for the thud of it hitting the green or look for the splash and hear the plop of the ball hitting the water. I hit a 140 yard shot to the 135 yard pin which was in the very front of the green. I heard the thud and when I walked to the green I saw that I hit the left side of the green and rolled back onto the footpath leading over to the green. With the pin at the front of the green at the bottom of the downhill slope it was a real touch pitch shot to keep on the green. My buddy didnt think I could keep it on and I won $20 from him by proving him wrong. I was about 6 inches short of reaching the slope that would have fed it down to the hole location. I ended up 3 putting for a double bogey, but at least I didn’t contribute to the 120,000 balls hit into that water annually!!!!!!

We didnt get to play 18 because we were out of light, but were happy to have played 17. After we ate something in the clubhouse we got in the car for the 3.5 hour drive to Lecanto for Black Diamond Ranch.