Each year three of my friends visit Richmond to compete in a Ryder Cup style event that we call The Fred Ridley Cup. It’s named after amateur golfer Fred Ridley who won the US Amateur in 1975 when the club where I play last hosted the event.

This year The Ridley Cup turned out to be a real dogfight. Of the six matches contested four of them came down to the 17th or 18th green. There were some huge heart breaking putts made to win key holes as well as matches, but the biggest and most gut wrenching shot was when Jay jarred his tee shot on the 14th hole of the final match from 196 yards with a 5 iron . . . ACE. It was an incredible shot. Unfortunately, it was against my partner and Jay winning that hole ultimately led to his partner and him winning the Fred Ridley Cup. All things considered, its a little easier to stomach losing to a guy who aced a key hole. Great shot Jay and congratulations! So glad I was there to see it. 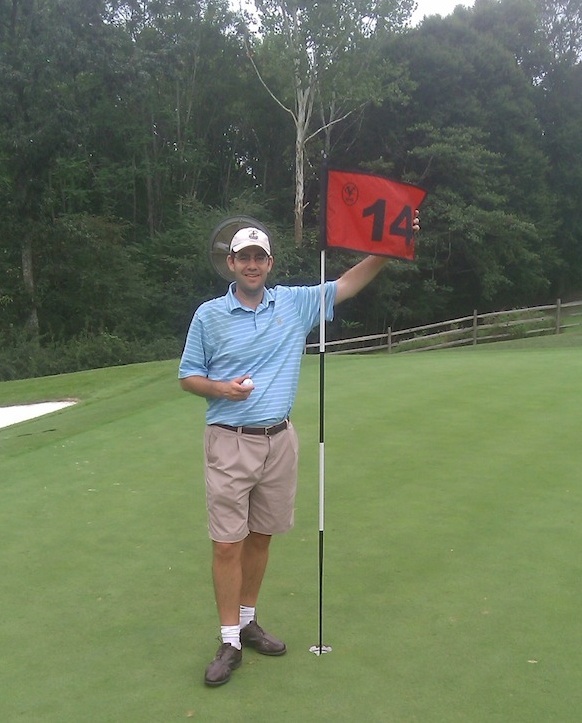 Another note from this weekend for those of you following the progress of my golf game . . . I finally broke 80 for real this weekend. Although I previously posted a 79 at Shoreacres it was not quite the ‘real thing’. I had a triple there that posted as a double because of equitable stroke control. Also, Shoreacres is a par 71 so even with the adjustment to the double I was still 8 over par which would have been an 80 on a par 72 course. Yesterday morning (unfortunately, after The Ridley Cup was over) I finally got it done for real and scored a 77 (5 over par) at my home course.

I’m off to Merion for 54 holes this weekend, so I’m hoping that my mojo can stay with me!!! Thanks to all who offered help, advice and tips on reaching this milestone. I finally got out of my own way and got the monkey off my back!